How Farmers are benefiting under the Modi government? 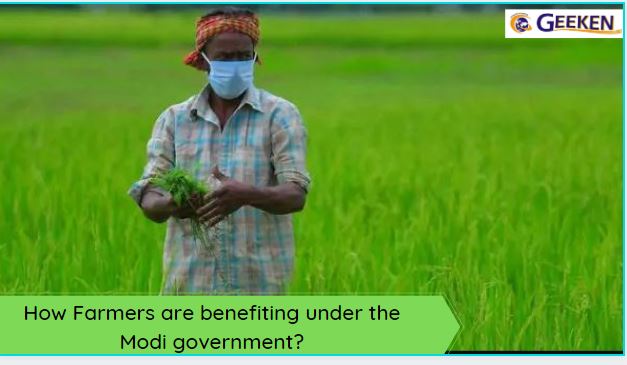 The growth of any nation is connected to the well being of the farmers and the increased productivity of farming. The new India as envisioned by Prime Minister Narendra Modi who is running on his motto of SABKA SAATH, SABKA VIKAAS, is a more progressive and advanced nation. A Farmer’s welfare is an important part of his vision. The initial steps of any transformation in the country come from the concept of awareness. Awareness is very important as to how the people of this nation are doing their part for the welfare of the nation. According to recent research, the government has increased the allocation budget for the agricultural ministry by 7.81 percent to Rs. 52,655 crores. The total allocation for agriculture and allied sectors has been increased to Rs.57,502 crores for the next fiscal. With the nation, farmers will also receive numerous benefits under different policies. The top 5 reasons as to why farmers are benefiting under the Modi government have been mentioned below.

To ensure that the farmer of our country reap good yields, the focus on strengthening sowing related activities is very important. The government of India has taken various steps in this field. Considering that the health of the soil plays an important role in agriculture, the government has released more than 13 crore soil health cards from 2015 to 2018. Enabling higher productivity and motivating farmers by providing them facilities is a major goal for the Indian government. Modi government has taken important policy initiatives and decisions to address the topic of farm credit and protect farmers from being exploited in the hands of informal credit vendors such as people like moneylenders. The government has made sure that all the records of allocation, farm credit, food grain production, and the stock of pulses are taken care of.

PM Kisan scheme is a central sector scheme with complete funding from the government of India. Under this scheme, income support of Rs.6000/- per year in three equal installments will be given to small and marginal farmer families that have a combined landholding/ownership of up to 2 hectares. As per a resource, over a total of 7 crore farmers have already benefited from this scheme. Most of the registrations for the scheme have been from Haryana only. There is no registration fee for the same and all the small and marginal farmers are very much grateful to the government for the launch of this scheme. With time, the government has planned to bring more benefits and increase the benefit amount. The government has been relying on budgetary allocation to make any future decisions.

The government launched the Pradhan Mantri Fasal Bima Yojana in the year of 2016 and it was mainly advertised as incorporating the best features of previous crop insurance schemes while removing all their deficiencies. Since crops are the only bread and butter for farmers it was significantly important for them to be educated about the basics of this scheme. By the end of 2015-16, the National Agricultural Insurance scheme accounted for a total of 64% of the insured farmers which is a huge percentage. Farmers are about to pay low fixed premiums according to their affordability level. Currently, farmers are paying a uniform premium of 2% for Kharif crops and 1.5% for Rabi crops, and the government pays the differential balance amount for the premium. It is a risk pooling scheme for the government but they are making sure it is voluntary for the farmers for their benefits in the future.

Previously the strategy for the development of the agriculture sector in India was focused more on raising agricultural output and enhancing food security. Increasing productivity through advanced technology was one of the major objectives. Doubling the farmers’ income by 2020-2022 also requires annual growth of 10-11 percent in every farmer’s current income. The former and ongoing rate of growth in farm income has to be sharply increased regarding the same. Strong measures are required to harness all the available and possible sources of growth in income within as well as outside the agriculture sector of India. Sources like an increase in productivity, crop intensity, saving in production cost are a few of the major things which need to be taken care of.

The two drought years could have been efficiently managed if the government had focused on strengthening the irrigation network systems. The Pradhan Mantri Krishi Sinchayee Yojana has always remained underfunded because of which the agriculture sector remains affected. The farming community is still struggling to cover the cost of cultivation apart from any sort of income and profits. The government is taking steps to increase profitability in agriculture by making sure that there is a minimum 50% profit over the cost of production, cheaper agriculture, inputs, and better credits. Introducing and promoting low water consumer irrigation techniques which will lead to optimum utilization of resources. Crop planning is based on soil assessment and setting up more and more mobile soil testing laboratories.